Updates on the unfolding developments in Ethiopia
The Government of the Federal Democratic Republic of Ethiopia has been forced to take rule of law enforcement measures to effectively respond to the unceasing belligerence perpetrated of the TPLF clique in violation of the Constitution of the Federal Democratic Republic of Ethiopia.
Following the premeditated and surprise attacks on the National Defense Forces Northern Command launched by TPLF in the early hours of November 4, 2020, the Federal government has initiated a large-scale law enforcement operation in the region per Federal mandate and responsibility according to Article 51 of the FDRE Constitution.
Since the present Government came to office by peaceful means in April 2018, members of the TPLF clique, who ruled the country for the previous 27 years through means of oppression rather than law, have been fugitives from justice hiding in the city of Mekelle and using the civilian population as human shields.
Over the past two years, the Federal Government has adopted an attitude of patience to contain transgressions by the TPLF and the illegal elements it has been funding and mobilizing to destabilize the nation. By opening up the space for dialogue, negotiation and reconciliation over the past two years, the Federal government has availed all peaceful options available for TPLF to engage in the reforms process. Instead, the TPLF criminal clique made a public vow to make Ethiopia ungovernable, which they carried out by planning, training, financing, and actually executing – both directly as well as through their criminal surrogates – horrendous crimes in several parts of the country, including in the areas of Western Gondar, Shashemene, Arsi, Bale, Benishangul, Gura Ferda, and most recently Western Wollega.
All efforts by the Federal Government, including through the engagement of neutral mediators, came to naught. On the contrary, the TPLF orchestrated an illegal election, anointed themselves the legitimate rulers of the Tigray region and, most importantly of all, declared the Federal Government illegitimate and purported to withdraw recognition from it.
The climax to this intransigence came in the early morning of November 4, 2020 when the criminal clique attacked the Ethiopian National Defense Forces that have been stationed in Tigray region since the end of the war between Ethiopia and Eritrea in 2000. Only then did the Government order the Federal Defense Forces to defend themselves by all necessary means and restore law and order in the country.
Effective November 6, 2020, a state of emergency in accordance with article 93(1)(a) of the Constitution decreed by the Council of Ministers has been approved unanimously by the House of People’s Representatives and is in effect primarily in the Tigray Region for a period of six months.
Given the challenge posed by the flagrant and repeated unlawful acts in the Tigray Regional State to national security as well as law and order, the Federal Government has deemed it necessary to undertake its law enforcement operation within the framework of a State of Emergency. A State of Emergency Taskforce, chaired by the Chief of Staff of the Armed Forces has been established to bring within one command structure all military and law enforcement forces that are deployed to implement the State of Emergency. The State of Emergency Taskforce has been authorized to broaden or narrow down the geographic scope of application of the State of Emergency and to put in place through directives state of emergency measures it deems necessary. In particular, the Taskforce could to the extent it deems necessary;
• disarm any security force of the Regional State and to maintain the peace and security of the civilian population;
• Impose restrictions on modes of transportation
• Impose curfew
• Detain those it suspects taking part in illegal activities that endanger the constitutional order
• Use proportionate force to restore law and order
• Take measures necessary in furtherance of the objectives of the State of Emergency
The Federal Government is tasked with establishing and maintaining the rule of law; protecting and defending the Constitution and ensuring peace and security of its citizens. As such, the Federal Defense Forces are determined to bring an end to this criminal enterprise with the least possible cost to the civilian population in Tigray and the rest of Ethiopia. 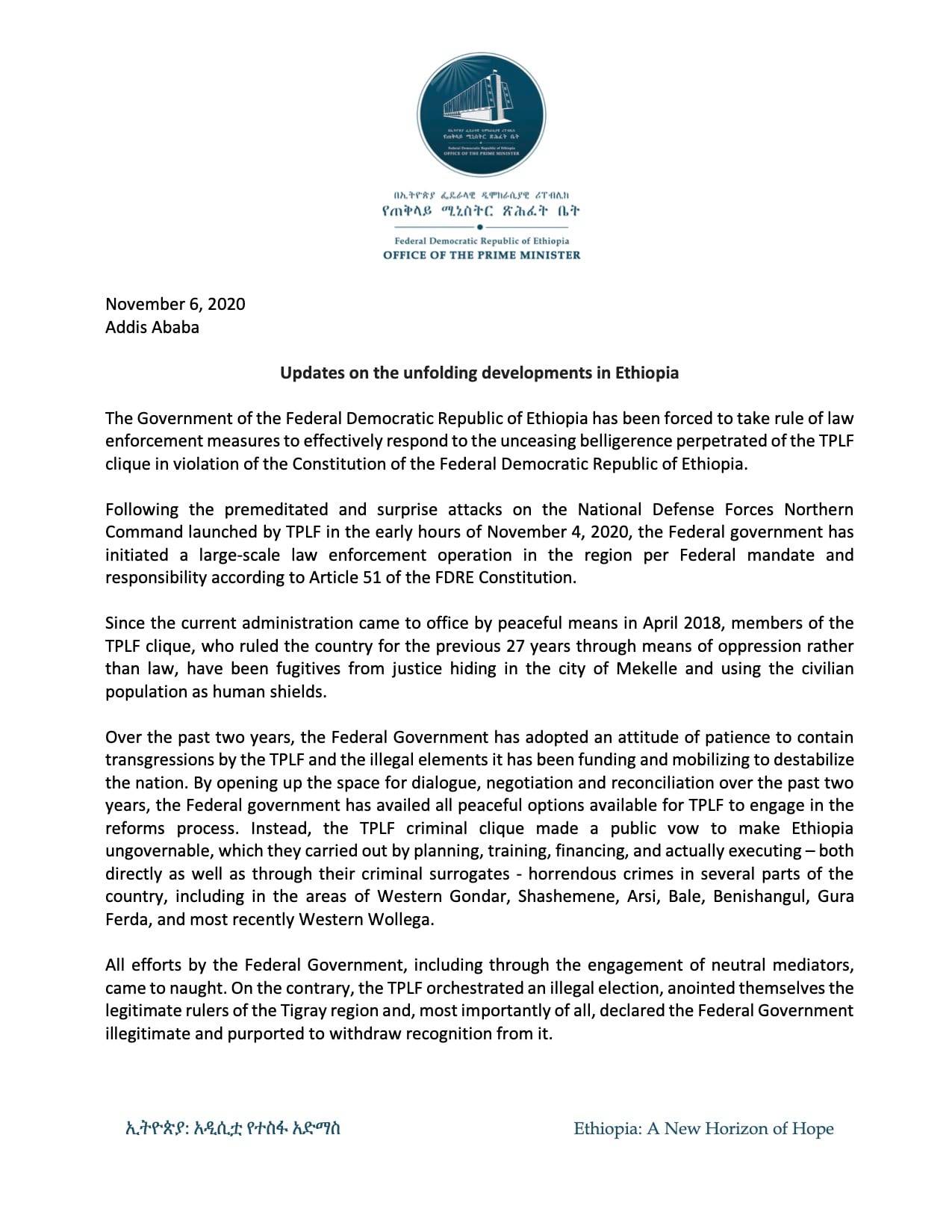 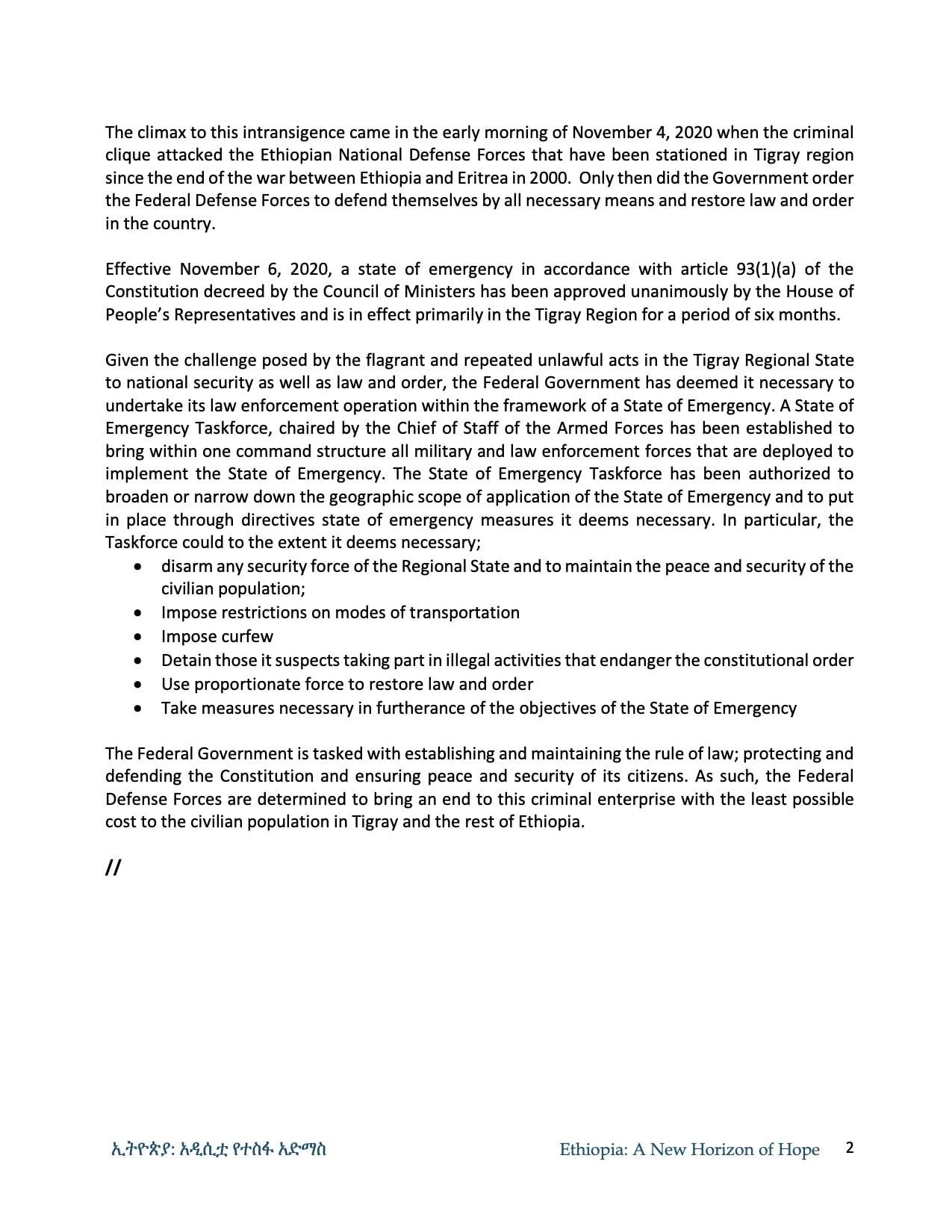